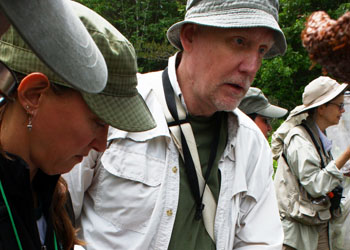 During the late 1990s, the few professionals who worked with odonates in Wisconsin increasingly began to realize that a great deal of help would be needed to adequately survey the entire state to learn about the distributions and important habitats of all of the species of dragonflies and damselflies (Odonata) that called Wisconsin home. The state was simply too big and held far too many types of aquatic habitats to be adequately surveyed by just a couple of people!

We thought a citizen-based monitoring (CBM) program could be used to acquire data collected by many interested non-professionals that would help improve scientific knowledge about our odonates, and we began to plan the inception of such a program. In about 2000, William A. Smith, a WDNR zoologist with much interest in odonates, and Robert DuBois, a WDNR research scientist with a similar interest, initiated a pilot Odonata survey program in the northwestern counties of the state. The program, which we called the Wisconsin Odonata Survey (WOS), grew incrementally into a statewide survey with a website roll-out in 2002. 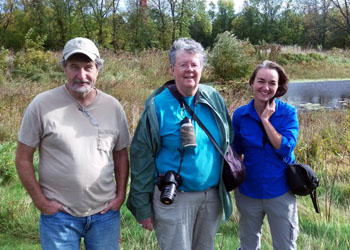 Since its inception, educational talks and field outings have been a focus for promoting and growing WOS, and it has certainly been a successful program. From 2002 through 2017, 171 people made more than 5,400 site visits that have resulted in more than 30,000 new Odonata records from around the state, including many first records for all 72 counties, and a handful of new state records as well. More than 5,000 records were submitted each year in 2016 and 2017.

This wealth of data has led to much greater understanding of the ranges and important habitats of all species in the state, including rare species. Also of great importance, their involvement with WOS has been a pathway for many people to become more deeply and meaningfully engaged with nature. 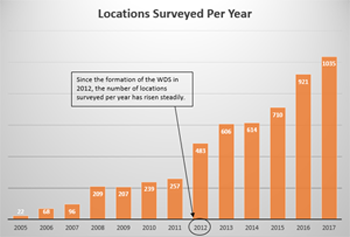 Despite the initial success of WOS, some short-comings with the program became evident over time. Recruitment and retention of volunteer cooperators were continual challenges. The program was rather loosely organized and relied on highly motivated cooperators to survey habitats near where they lived, often alone, and with little training or guidance. Opportunities to train new cooperators were sought, and some progress was made, but the logistical difficulties associated with trying to offer training programs throughout a large state were substantial.

In 2012, the leaders of WOS founded the Wisconsin Dragonfly Society (WDS) as an extension of the existing survey and as a means for giving more structure and organization to citizen science activities involving odonates in Wisconsin.

A board of directors and officers was established to oversee the WDS and bylaws were assembled. The mission of the WDS is to “foster appreciation, study and enjoyment of Wisconsin dragonflies and damselflies and the aquatic habitats on which they depend.” Our goal is to be the complete source for information about the odonates of Wisconsin and to provide the citizens of this state with the educational tools they need to enjoy and ensure a brighter future for this resource. 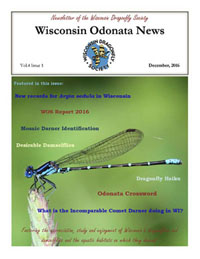 We seek to emphasize outreaches to youth and to the minority groups that have sometimes been overlooked by natural resource agencies, as evidenced by our partnership with the Urban Ecology Center in Milwaukee. And, the formation of the WDS has clearly boosted the effectiveness of WOS as evidenced by the steady increase in the number of locations surveyed since 2012.

The WDS produces an occasional newsletter called the Wisconsin Odonata News (WON), which was first created and edited by Ellen Dettwiler and is now produced and edited by Freda van den Broek. We also host an active Facebook group page that has over 1,000 members. This Facebook page has provided a pleasant forum of social interaction for members, who freely share their photographs, and their favorite locations for observing odonates. It has also become a tremendous venue for people to hone their identification skills. Members are encouraged to attempt to identify the images of species they post, and they can count on receiving gentle and thoughtful feedback from others. Identification tips for the most challenging species groups are frequently posted. Those who have taken advantage of the learning opportunities afforded by the Facebook page have quickly advanced in their understanding of odonate identification, life history and behavior, and in improving their techniques for photographing them.

Annual meetings in summer are held at different locations around the state and have become an enjoyable way for members to get to know and learn from each other. These meetings provide a forum for discussing the business of the society and are an outlet for having fun chasing and photographing odonates, and for developing and improving identification skills together.

The WOS website provides information about all the species of odonates in the state, gives guidance on how to survey for them, and provides a reporting page for citizen scientists to record their observations. In 2013 the website received an overhaul to become better integrated with the new Wisconsin Dragonfly Society, and in 2018, the WDS rolled out this website with links to the WOS website. The WDS is also in the process of applying for non-profit status.

The WDS has made strong strides since its inception to increase knowledge about dragonflies in Wisconsin and to provide a captivating, informative, and convenient avenue for people to enjoy them. Why don’t you come along and join us!

The Wisconsin Dragonfly Society promotes and encourages the conservation of Wisconsin's dragonflies and damselflies.